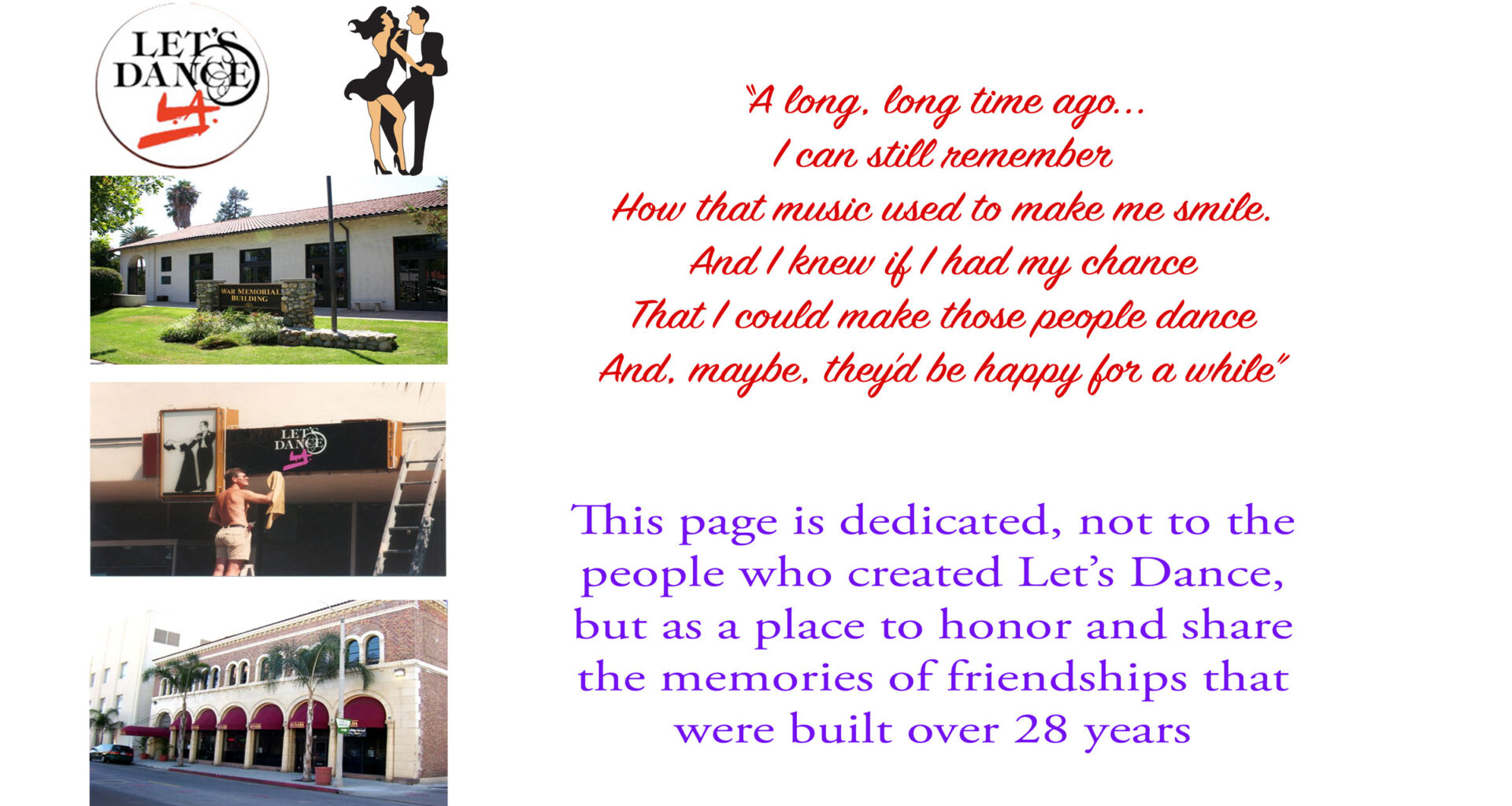 Some of you were only at Let’s Dance for a very short time, a few of you from the month we opened in 1988 to when Terryl and I moved to Texas in 2017.

Some of you found the love of your life, some of you “thought” you did. A few of you ‘ahem‘, fell in love quite often. Others discovered a talent they didn’t know they had, and some tell me LDLA changed their life.

Unlike our Facebook page which allows for one to one messaging, our goal here is to help some of you reconnect with lost friends and create a repository of pictures and memories that you can add to. How can you help? Send us any pictures that you might have with others from Let’s Dance, and send us a little testimonial of how your experience was. Finally send us a 20 second video clip with your name, what years you were there, where you are now. and whether you are still dancing. Click on any picture to view full size and Click X to close. If you are at work, turn down your volume as some videos will auto load with music.

Fortunately, Nini saved many of our calendars, flyers, and rosters. So I will try to gather this into a yearbook quality arrangement. Let’s Dance had Swing, Salsa, Ballroom, Latin, Lindy, Hip Hop, Rueda, Pilates, and Argentine Tango departments. In addition we had lots of kids that grew up in front of our eyes.

Over the years we brought dance masters and legends to share their wonderful knowledge with you. Sometimes we didn’t know who they were until much later. Performers from Norway to South Africa, Japan to London. Olympic competitors, and Hollywood celebrities. Big Bands, Salsa Bands, magicians and Hall of Fame athletes.

This is as much a thank you to you all as much as it is a celebration of a time we will not see again. Whether you were at 216 East Main, the Granada, or the War Memorial this is for all. Share it with your friends and remember that though we were about dancing, we were more about family. But no matter what we laughed and smiled. – Enio 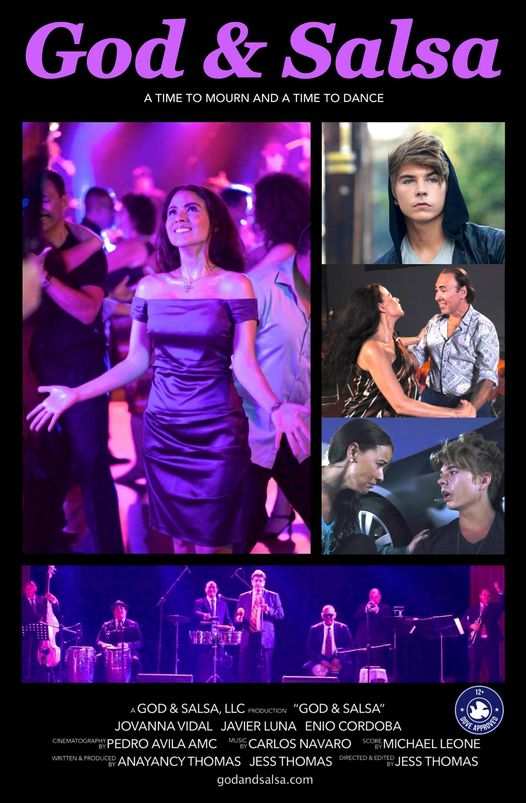 Movie premiere's May 6th in Orlando! Update  4/28/22– We are days from the premiere, the film took all the major prizes at both the LA Film Festival and NY Film Festival. Those included Best Film, Most Inspirational, Best Screenplay, Best Director, Best Actress and Best Actor. Fortunately, for my acting- no Razzee! The red carpet event and film debut will happen at the International Christian Film Festival in Orlando May 6th. The film should be out on Pay Per View (i.e. Netflix, Amazon, Apple Plus) in July.

Long time student Anayancy Thomas and filmmaker husband Jess Thomas, just completed their dream film God & Salsa. Based on some experiences of Anayancy at Let’s Dance, and some added Hollywood storytelling, the script was terrific. With Enio as one of the actors and choreographer, many scenes were created with over a dozen former Let’s Dance LA students. Terryl got to play herself and harass Enio as usual. Enio and Terryl flew in for the week, went straight into filming and flew home the next day.

One of the fun developments is that after we worked so hard to make them good dancers in the past, our Let’s Dance Students suddenly had to dust off all their original bad habits and look like the worst beginners ever. After seeing their improvements through the Hollywood timeline, you would think the “God” aspect of the film has to do with the “miracle” of Enio and Terryl turning these left footed monkeys into nice dancers. Though more LDLA dancers were cast to be in the class and club scenes, the sudden spike in Covid caused many to have to drop out. Long time friend Carlitos Navarro brought one of my favorite bands Son Y Clave to play for the club scenes. Son Y Clave played at both 216 and the Granada Alhambra probably as much as Johnny Polanco if not more.

With crew masked throughout the filming, actors including yours truly, had to constantly be reminded to put masks back on between scenes, makeup and numerous costume changes. We will post pictures very soon and keep you updated when the film will be released.

Back in the Early Days

See how many of your friends you recognize

Oh Yeah! We Have Videos.

Do You Still Remember?

Check out this video, This was shot about about 13 years apart. Look how many people are in both. And as always Emily is in the middle! 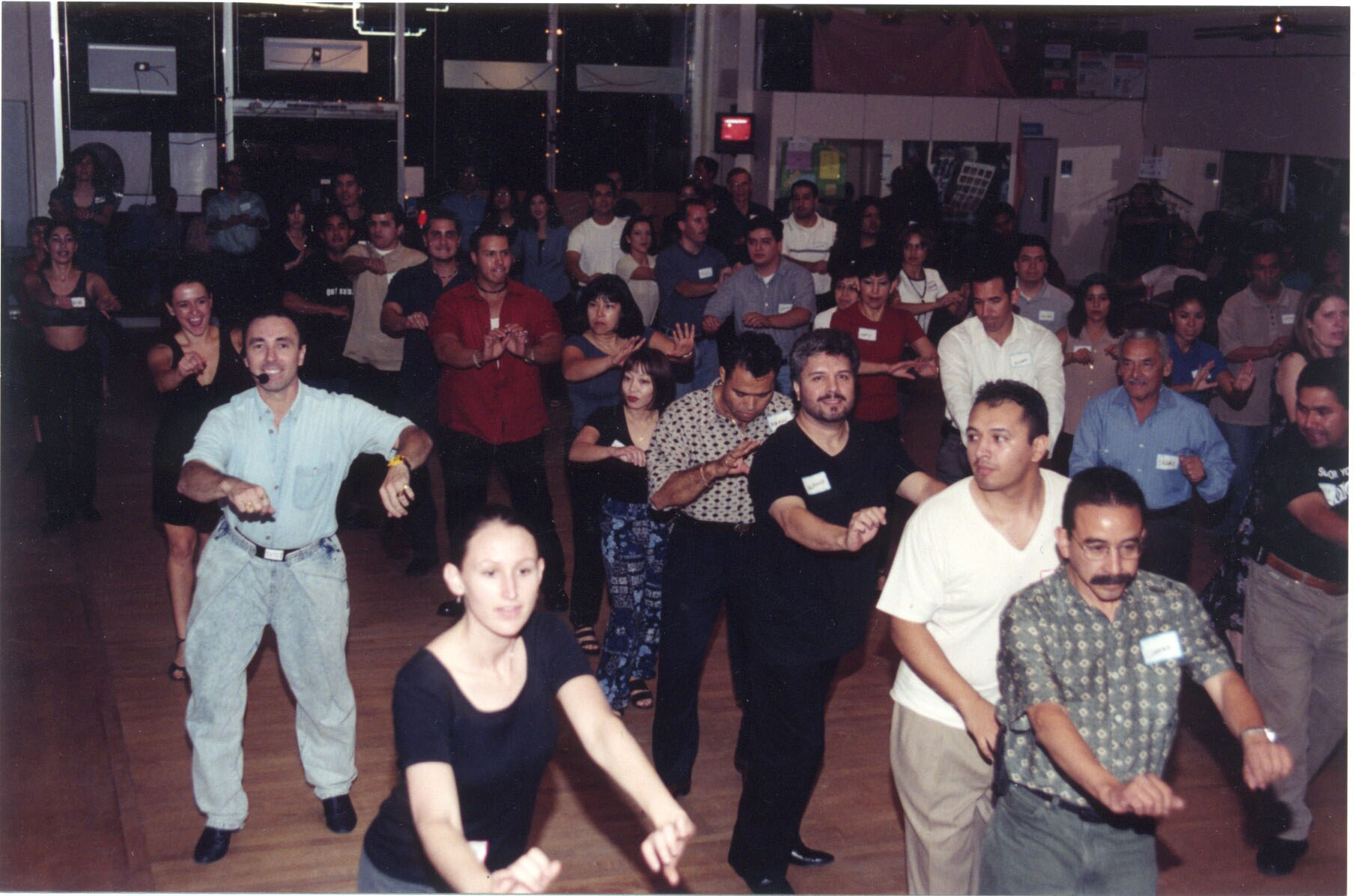 30 Years of Our Logos

1986- Our First Name and Logo by Ken Meek
Ken Meek's beautiful Scroll Let's Dance Logo 1988
1989 Revision-LDLA logo
Our Early Logo Couple Drawn by Ken Meek
A drawing of Enio & Terryl by our X-Men cartoonist student
Original Granada Logo- Designed by our student!
Drawn by our student on a design by Terryl- the original Guitarras Logo
Tired of being asked: "What's the Chinese Character under the Let's Dance stand for?" so I redrew it in 2005
The Last Logo in LA
Previous
Next 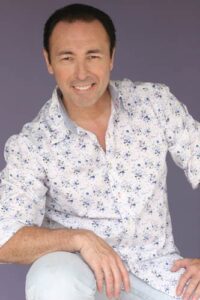 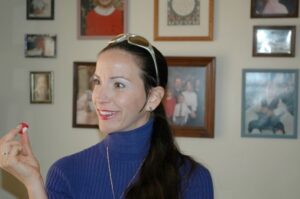 Site Map-Where Should I Start?

You Can Help Us By Telling Your Friends AboutThe Site and Sending Us Pictures. Let people Know Where You Are By Filling Out the contact Card