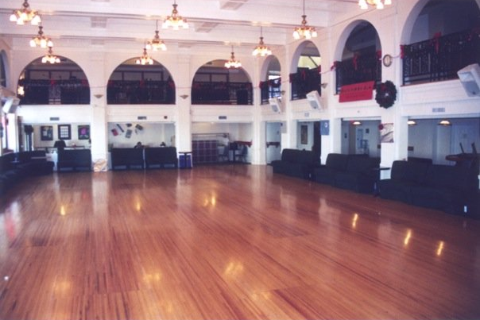 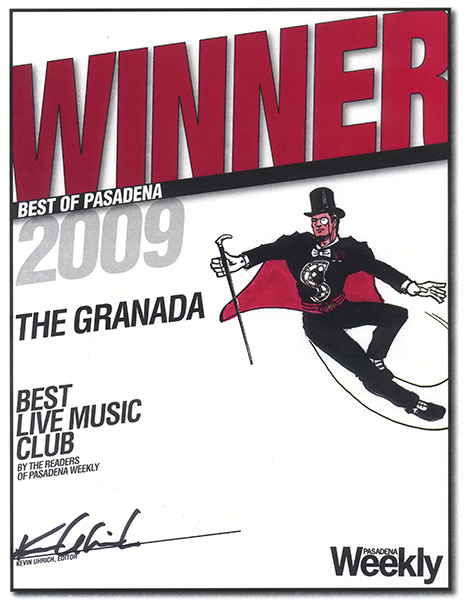 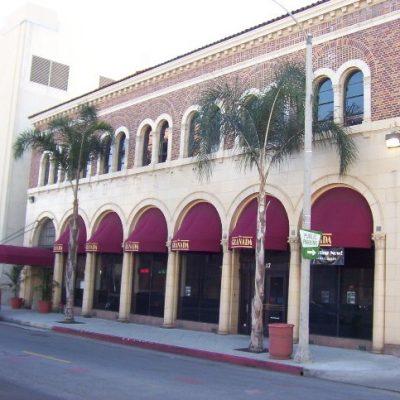 From 2002 until 2010 The Granada was blessed with an incredible list of artists. Being close to downtown Los Angeles, we had quite a few celebrities that dropped in to hear a visiting artist play. Our association with Albert Torres Productions gave us access to some of the biggest names in Salsa. Our opening night had Israel Lopez Valdes, better known as Cachao, the Cuban double bassist and composer. Cachao was widely know as the co-creator of Mambo won many Grammy awards and is on the Hollywood Walk of Fame. Many other Grammy Award winners such as Alfredo de la Fe, Artie Webb, Poncho Sanchez, Jimmy Bosch, Ray de la Paz, Yalil Guerra, and “Patato”. These gentlemen were either part of the heyday of Salsa or played with the giants such as Tito Puente, Celia Cruz, the Fania AllStars. Many of them are considered the best in the world at their instrument! Los Angeles also could rival New York with its number of bands. Johnny Polanco’s LA Amistad, Carlos Navarro’s Son y Clave, Son Mayor, and a dozen other bands rotated through our 8-10 live Salsa nights a month. On top of that we were fortunate to get visiting superstar bands such as Spanish Harlem Orchestra from NY, Grupo Gale from Columbia, and Maraca from Cuba were just a few artists that packed our house to the rafters. And whenever they were in town other local stars such as Kareem Abdul-Jabbar, Jimmy Smits, Ozomatli, Steve Salas of Tierra would come just to watch.
Previous
Next

The Legacy of LA Bands and Clubs

When I was a kid, I remember my parents going to hear Perez Prado at the Biltmore Bowl. By the time I  started to know Latin clubs existed, I learned about the Coconut Grove at the Ambassador Hotel. Shortly before it was torn down, I performed a huge industrial show with the Rat Pack impersonators. I heard on the radio about big dance concerts with Tito Puente, El Gran Combo, Orquesta Aragon. Around 1972 when I started dancing, Virginia’s on 8th, Candilejas on Hollywood Blvd, and El Cid were the clubs for Mambo & Cha Cha. The world went Disco by late 70’s and by the time Salsa started to catch fire around 1991, only Candilejas was left. As Disco died, clubs downtown Myron’s Ballroom was renamed Grand Ave, The Mayan became a huge Salsa club, the Bonaventure Hotel were the downtown spots. The Westside started with St Marks in Venice, The Boathouse on the Santa Monica pier, the Red Onion in the Marina, the Proud Bird at LAX and a few others. The East side had banquet rooms Quiet Cannon & Luminarias but sporadically. A bit farther South, Stevens Steakhouse and a few in Anaheim. But with so many clubs, suddenly there was a big need for bands. The Conga Room an idea of Joe Cassini and Brad Gluckstein became a big hit on Wilshire.

When I started dancing the bands I remember were Johnny Nelson, Johnny Martinez’ La Maquina, Rudy Regalado, and my favorite Versailles. But as with most musicians, bands breakup and reform. Versailles became Siva, and later Son y Clave. Then Octavio Figueroa, Charanga Cubana, and La Palabra. Soon I heard about this great band playing at St Marks and El Floridita- Johnny Polanco & Conjunto Amistad. El Floridita had a unique night on Mondays. Being that Monday is an off night, A list celebrities would show up which made it even more fashionable.  In Pasadena a group of friends formed a group called the Mambo Society. Led by Raul & Alicia Gomez the group would start Mambo nights in Pasadena. After a couple years they moved back to Studio City. Alicia threw so many parties that were just Latin Music and they got so big that she started to rent out the Sportsmen’s Club on Ventura. Although we were originally asked to teach we had the studio and deferred. Albert Torres took over and created a weekly night that became THE place to go on Friday nights. With Laura Canellias, William Ochoa and Joe Cassini teaching, the night became the Valley place but being a banquet hall ,never on Saturdays.

Enter the Granada in 2002. Though I had dances in the studio with Polanco, Son y Clave, Johnny Martinez and a few others, we didn’t have a bar so it was too expensive to do regularly. At the Granada, not wanting to compete with Sportsmens, I started with weeknights and Saturday. But soon we were doing Thursdays, Fridays and Saturdays. By 2006 the main clubs in metro LA were Mayan, Stevens, Conga Room, Mama Juana’s, El Floridita and the Granada.

By 2008 the older bands started to retire and new ones came in. Over the 9 years I had the Granada, the main bands were Son y Clave, Johnny Polanco, Son Mayor, Opa Opa, Echo Park Project, Chino Espinosa y Los Dueños del Son, Costa Azul, Charangoa, Angel LeBron, and Octavio Figueroa. Newer bands such as Conjunto Afro Son, Tromboranga, and a few others started to pickup the stars from the retiring bands and you could no longer tell the bands from one another.

Carlos Navarro, brother of Venezuelan Superstar Cherry Navarro, is the artist that introduced 17 year old Enio to Salsa, when he was playing at Virginia’s in the 70s. As leader of Versailles and Siva, he opened for the Rolling Stones at the LA Coliseum. He played our first live night at the Granada. Here Carlitos has Grammy Award winner Yalil Guerra on Cuban Tres and fantastic vocalist Luis Barragan. 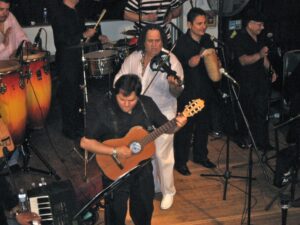 So tight was this band that when a superstar singer from new York or Puerto Rico came in, Johnny’s LA Amistad was the band that would back them. Cachao, Jose “El Canario”, Manny Oquendo, Jimmy Bosch, Ray de La Paz, Frankie Vazquez were just some. Featuring Artie Webb (from Fania) on flute the band had the NuYorican Sound. But with Johnny able to play Trombone, Cuban Tres and Violin, he could go from Salsa Dura to Son Montuno to Charanga. Being a former Marine, Johnny was not only dependable but ran many guys out of his orchestra for being late-a promoter’s biggest headache. 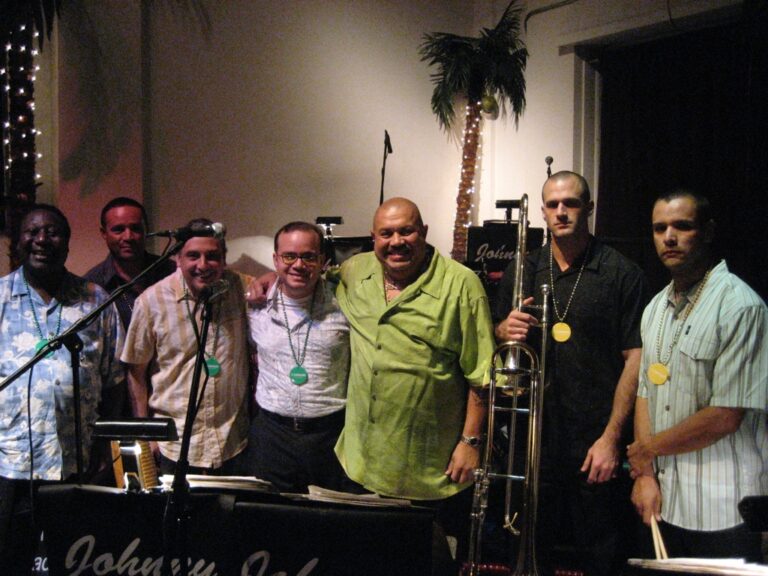 Originally from Costa Rica, Chino started in LA singing with Opa Opa. With his operatic training, Chino did marvelous covers of Hector Lavoe and Frankie Ruiz. In the picture here, Chino sat in as “Desi Arnaz” for our Back to Havana night with Son y Clave. Buckets of energy and his trademark “Donde esta el CARI˜nO?” 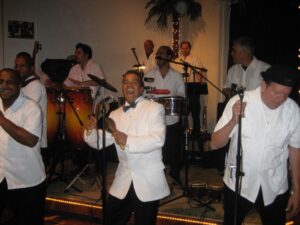 Led by drummer Eddie Ortiz Son Mayor was unique in that they had a male and female as lead singers. Eddie was early in bringing the Timba sound to some arrangements. But his Salsa was as good as any!”  Best of all Eddie met his wife Laurel one of our students at the Granada! 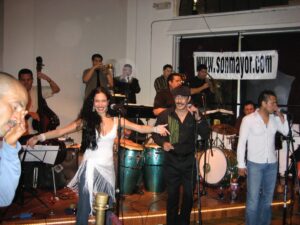