The Staff of Let's Dance

I’m sorry but here is one place I have to brag. Outsiders don’t understand how special the teachers at Let’s Dance L.A. and the Granada really were. At many studios the teachers are just out of training school – one page ahead of the student. At Let’s Dance on our regular staff we were blessed with World Champions, US Champions, future Hall of Famers, Hollywood Choreographers, National Champions of other countries, professional ballerinas, and true dance Masters. And how did we keep ourselves sharp? We brought in the best of the best. A 15 time undefeated World Champion to teach our kids camp. More US Professional Ballroom and Latin Champions for workshops and coaching. When a new dance came on the horizon, several times we were first to teach it or among the first. Below the next gallery will be teachers who visited Let’s Dance to teach at our special events. And finally a way for you to reconnect with them if you’d like

What started with a one day workshop of three top Swing Teachers, turned into an event still remembered today as legendary in the Swing World. Our first Swing Jam had 3 teachers, and each one after that added more and more US Champs. By Swing Jam 10 we had to put bleachers in 216, and rent two other halls a few blocks away. Later we repeated the process with ten incredible MamboManias, again bringing in world famous Salsa and Mambo teachers from Cuba, Europe, Puerto Rico, and dancers from all over the country. Most importantly we blended great competitive teaching and true social dancing so you could have one or both. Fortunately we have stayed connected to most of our teachers. On this page we have recent pictures of them as well as a game to see how well you know them, and down the page we will add video links of some of their most memorable performances.

Would You Recognize Them Today?

We were so glad to have these kids join us. Already Jr. Country Western World Champions, they place 2nd 2 years in a row at the US Swing Open Showcase Division with their electrifying speed and lifts. When they moved down here from Ukiah to study at Cal State Long Beach, we were happy to have them teach and have them around. Here is a compilation of their work. They are now back in Ukiah, Blair as a School principal and Eddie a full-time studio owner, deejay and occasional school teacher. Blair & husband Clay have two boys. 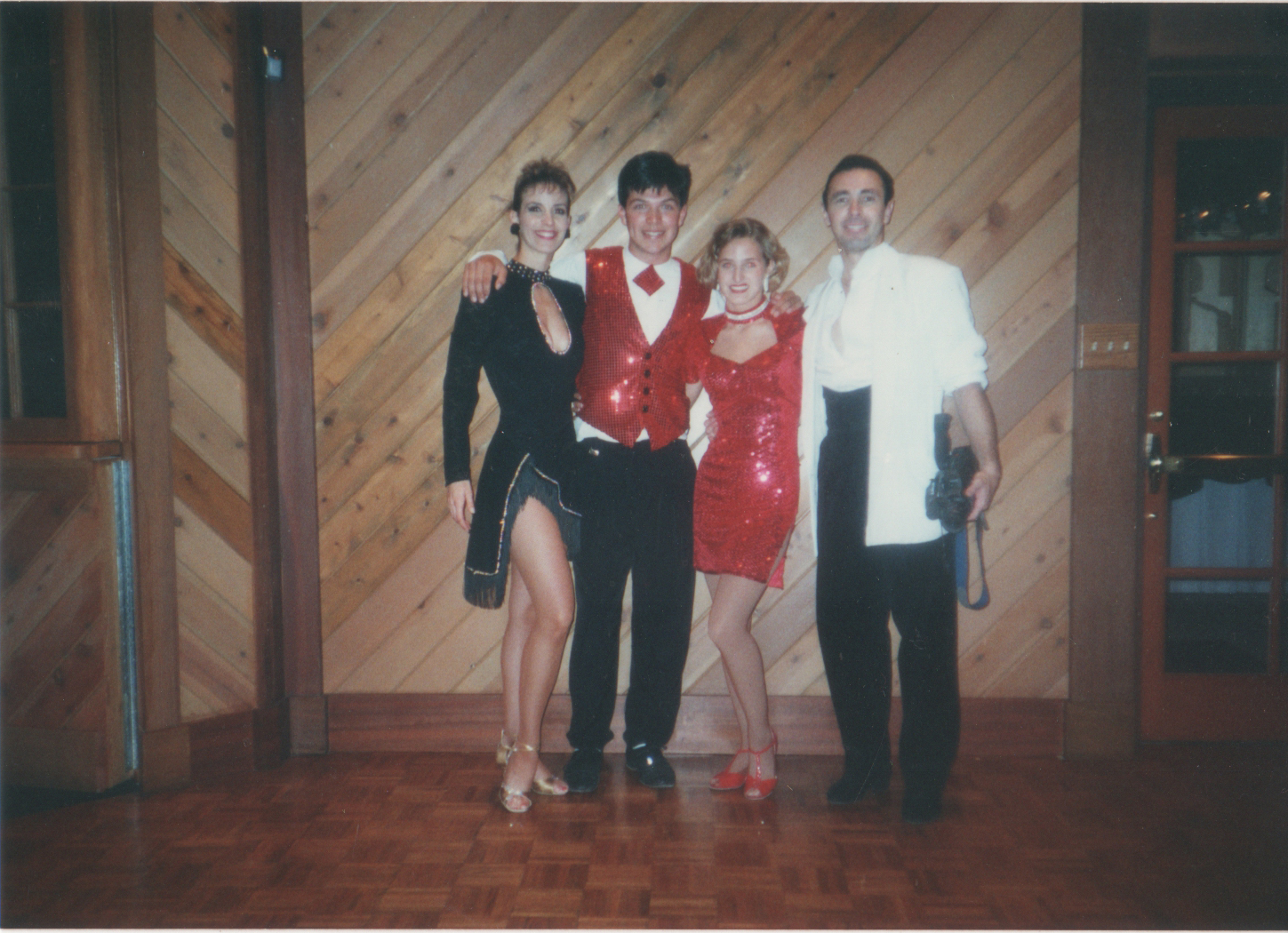 I knew Bob from my early competition days and he had just closed his studio with Aki Yamakido in Arcadia. It was really a blessing to have them join us since there weren’t a lot of teachers and students in the Alhambra area. In addition to his expertise at running a studio, Bob also contributed his expertise as a carpenter when he and Dan Docherty helped us extend the floor. Here, Bob is dancing with his wife Carla.

I knew Dan & Jo Docherty previously as they were regulars at the Westmor and competitions around the LA scene. One day they were walking down Main Street and popped in asking if they could “stretch their legs” Of course! I said. The look of absolute ecstasy in Jo’s face when they did a Slow Foxtrot will stay with me until I pass. Just watching them lit a passion for Standard in me – the Latin boy. His unsolicited pointers brought me to an understanding that passing my Imperial Society exams never did. He took the entire Ballroom class under his wing. He would come in and just sit always wearing a tie, enjoying the music and often giving me variations long forgotten that had a delicate charm. He had that razor sharp Scottish wit that made us laugh so. I nicknamed him the Professor, but he was a true Master! Sadly Jo passed away in 2016 and Dan in 2019

Jeanine Glasson appeared from Australia one day looking for a partner. She had been 3rd in the Australian Pro. talking Enio into coming out of retirement, the goal was to compete at Blackpool, qualify for the Australian Championships and dance at the Worlds Pro. With help from Bob Medeiros, Kenny Wetzel we worked really hard for 6 months to create a look that would stand out at the British. Unfortunately it wasn’t where we wanted it to be, so I decided to retire before we actually danced, and Jeanine moved to Holland where she found a great partner. 18 months later she was representing Australia in the 1992 World Championships with Wil van Roessel. She later married a German singing star before moving back to Australia where she now spends her time as a pro hang glider!

He started dancing at 15 cause Mom wanted him outside of the house for the summer so I took him along to my private lessons with Ron Montez. To keep him from getting bored, we paired him up with the sister of pro Denese Morris. Among the partners he would dance with were: a Laker girl, a future British Professional Latin Champion, come in 3nd on the national TV show Dance Fever, and move to England to learn from the best. Before leaving, he danced on 2 dance teams representing the US at the World Formation Championships in Germany.

Returning to LA Robert would get into Swing and Country. Pairing with Enio’s former partner Karen Lee, he came in 2nd in his first US Open Swing Championships. With Debbie Dandurand, he made the finals of the Ladies A Pro/Am Latin at USBC. With 2 different partners he would win the next 3 years in a row. Robert would go on to win 4 more US titles, several World Championships, dozens of competitions, and be inducted into the California Swing Dance Hall of Fame, and the World Swing Dance Council Hall of Fame. Helping me run the studio, we created the now legendary Swing Jam weekend events.  He now lives near me in Deerfield Beach Florida

Mic Thompson, is another of our Superstar staff. A BYU grad, we met Mic through Buddy Schwimmer. Mic is like a Roman Candle in a dark room. Bounding from one project to another, Mic is a creative genius in the Jazz/Musical Theatre type dancing. Mic can be seen as a Michael Jackson dancer in Dangerous and Thriller. Mic travels all over the world putting on live productions for Disney, Las Vegas, TV and film.

He sent us this great message: “The greatest treat I had while working as a Hollywood on camera dancer in LA , was being part of the performance faculty as well as taking Enio”s dance top notch ballroom dance classes. at Let’s Dance LA. The show’s were put on everywhere in So. CA. and the dancers were very close friends since we all grew up dancing along the same path which connected us altogether.. I believe this group to be very blessed by our maker Heavenly Father for my time at Lets Dance was spiritual loving charming energetic and laughter was the norm. My dear friend and ballroom dance fav is Natalie Mavor and I keep the spirit and memories of her and Lets Dance LA close to my heart to this day and forward….”

Another star of Let’s Dance, Annetje from Holland (where she was a highly ranked ballroom dancer), was living in Marina del Ray. I thank Anna for being a visionary and much of my success came from her ideas. Anna introduced me to the world sensation, Lambada, and we were the first to offer workshops in the USA. Next, she convinced me that the Mambo we were teaching was being eclipsed by a new style called Salsa. She could do magic decorating the studio for holidays.  Later after marrying Marlon Castillo, they returned to Holland where they opened a 5 story dance studio and nightclub. She also organized the first European Salsa Congress and had a huge Salsa video business.

Besides her great ideas, Anna was a wonderful dancer, never who stops learning seeking out the best teachers for Argentine Tango, Salsa, Bachata, & Lambada. She and I performed many shows before Terryl arrived.

Of all the bios, this the hardest one for me to write. Natalie was like my sister. My most treasured moment was winning the US Amateur Latin with her. To this day I will tell anyone that though there may be better, faster, more flexible dancers, she was the most natural dancer of anyone I’ve ever met. Though she went on to partner with at least a dozen more partners, she and I always partnered when she was between partners. Among her most important titles were US 10-Dance Amateur Champion, US Rising Star Professional Rhythm Champion and winner of the first Mayan Pro Salsa Championship with Steve Vasco. She danced at the Academy Awards with Mic.

Natalie never wanted to teach, she was very shy by nature. So at first, she would only teach if I would help her. Since I had done several gigs on cruise ships I convinced her that it was a sweet gig. When she and Curtis teamed up and went to sea, she was ready to quit after the first week of rehearsals. But like Natalie, she stayed, she mastered the art of doing lifts on a moving floor, and stayed for 10 years. Whenever they came off for a vacation, did did some of the best shows we have ever had at LDLA.

After Natalie had retired from Crystal Cruise, she opened a studio in New Hampshire. It was on a trip to Dallas to judge with me, that we discovered she had Pancreatic cancer. After 18 months she wanted to dance again and we got many of her partners together for a ensemble show. She and Curtis were the highlight though many top pros also performed. Sadly the little stinker told us she was free of Cancer but relapse and passed away about six months later.  –