The History of Let's Dance L.A.

You might want to pour a glass of wine and put your feet up. We’re talking 20+ years of great stories and fun, because as long as the Enio, Terryl, & Robert were involved, it was going to be a great ride.

Officially, before we were Let’s Dance I had started my classes as Shall We Dance at the War Memorial Building in South Pasadena. Unfortunately, we had limited days and hours and we had to clean it before every class. Lucky for us my aunt Nini had seen an add for a studio for sale in the Pennysaver throwaway mag. Though I doubted a serious studio would be offered there, I was shocked when it was really nice. It only took me a week to sign the papers and about 60 days to get permit and add a second bathroom for the guys.

Our first classes were April 1st, 1988 and on April 10th we had our Grand Opening. Not knowing what to expect we had almost 300 dancers the first night with a live orchestra, my US Championship Formation Team, a magician, and a demonstration by my coach and friends Ron Montez and Liz Curtis. Though they had retired from competition and no longer did shows, they graciously did a short demonstration. 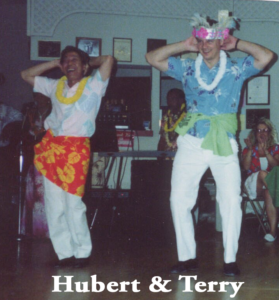 The Best Story Ever

We have many but try to top this one. Robert had just returned from England with his new partner (the future British Champion and winner of England’s Dancing With the Stars) Miss Karen Hardy. So to open the show we ask two students to help us set the scene.

Kurt Rudolph a teenager of normal size and hormonal, and Terry McCalpin, a former semi pro boxer of the extra large variety. The plan was to have Kurt, the hormonal teen, flirt with Terry’s girlfriend throughout the evening. When the dance set ended before the show, Terry was to create a huge ruckus, kind of throw Kurt around and finally pull out a toy 45 pistol point at Kurt and yell Bang bang as a  delayed cartoon shooting with ricochet sound effect plays.  At which point Kurt is supposed to fall daintily to the floor and expire. Ok scene set…

Enter Hubert. Hubert was a very sweet student from Cambodia. Everybody loved Hubert. Hubert stood 5’4″, Terry 6’4″. Hubert weighed 140 lbs wet, Terry probably 230. At the moment that Terry yelled Bang!Bang! Hubert jumps up from behind Terry and jumps on his back like a Koala bear cub on his mamma. Hubert is riding Terry’s back yelling “Terry don’t shoot, don’t shoot!” It took a few seconds for the crowd to process this surreal scene. They thought Hubert was part of the plot. I am supposed to say on the mic “Is there a doctor in the house?” Instead I am laughing so hard, I am crying- it took me three times to say a complete sentence. Everyone is getting that something was not as planned and the waves of laughter start to build. Of course our hormonal teen runs with it and his expiration is more like the dying scene in Monty Python’s Holy Grail. Poor Hubert is now red faced realizing it was part of the show. Little English Karen now comes out on cue dressed like Jessica Rabbit in a sexy mini nurses uniform. Karen has padded her top so she looks very busty. The plan is to take the almost dead teenager’s temperature, so she turns her back and bends over to reach into her doctor’s kit, at which point her bottom is directly above said hormonal teenagers face. Almost dead teenager sits up like he was shocked before he falls back now hopefully dead. Our sexy nurse now calls for Dr Beat and out comes Robert to the opening notes of Gloria Estefans Dr Beat.

But oh no the fun doesn’t stop there. Robert continues to reference Hubert’s bravery in between every number as did I. Of course the laughter is contagious and poor Hubert is burying his face in his hands. Robert takes care to tell Hubert that the Paso Doble does not really involve killing the bull so to please stay seated. More laughter

Hubert became famous that night. We recounted the story for weeks and whenever he was in class we introduced “Hubert The Hero” and he would always blush and laugh.

Melissa Dexter and Giacomo Steccaglia fresh from coming 2nd at the World Showdance Championships, were doing a 5 dance show for us. As is typical the guy talks while the lady changes from one sext costume to another.

Being Italian, Giacomo spoke briefly but Melissa needed more than 2 minutes to change. So of course Enio and Giacomo start up with the trash talking about how Women take so long to get ready( When it’s really the opposite according to Terryl)

So the two guys decide to kill time the way the best know, they dance. The problem is two type A  Latins trying to decide who leads. Let the fun begin… 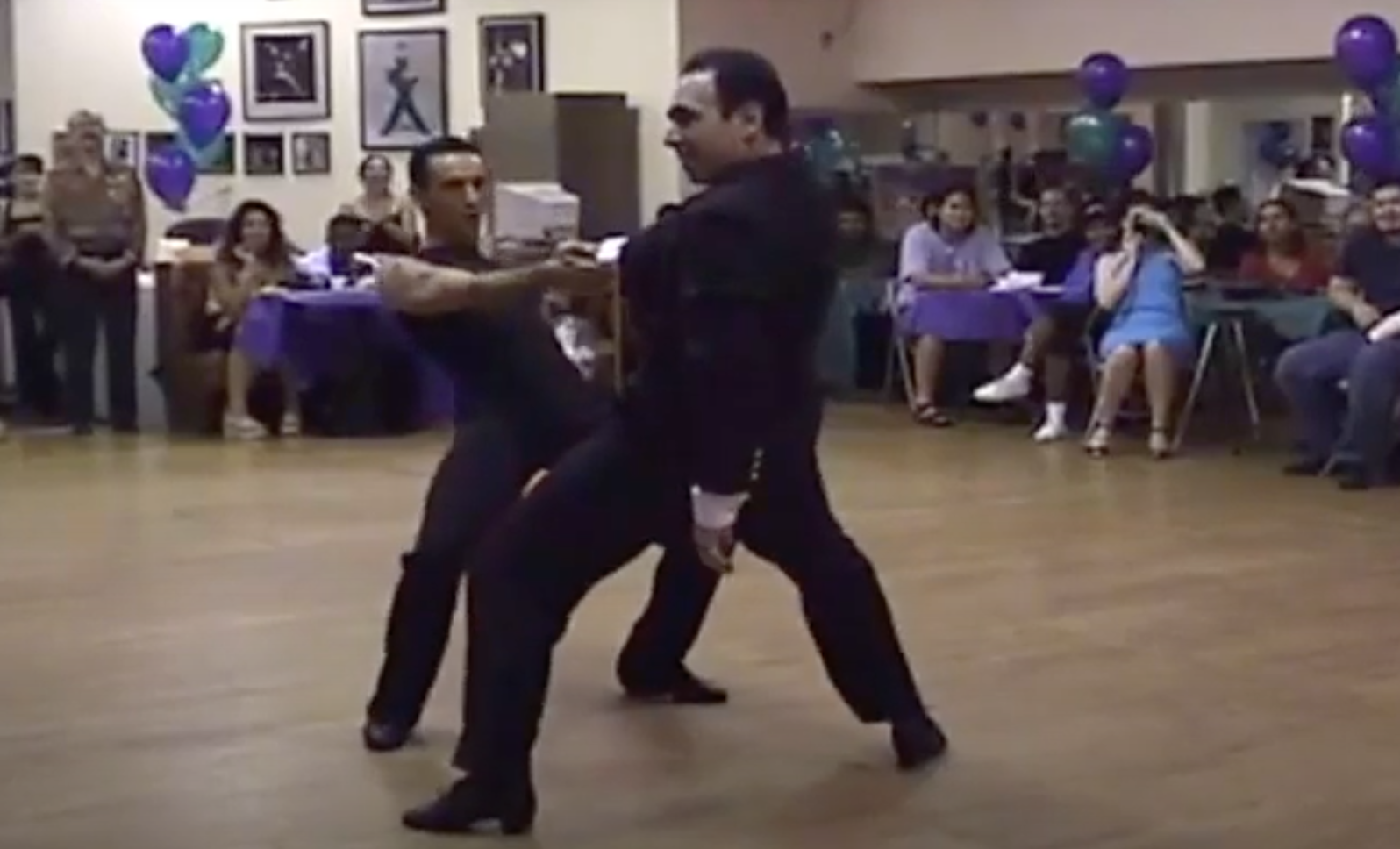 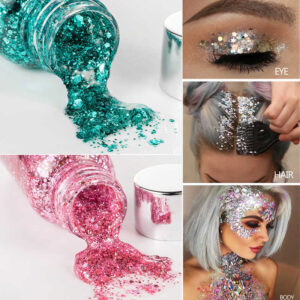 Enio’s reputation as a big kid is well earned. Hector Llamas had only been a LDLA student a few weeks and we had planned a competition pairing the teachers and our junior team members for a 4 dance competition. Hector being new, he was paired with Terryl. Hector used to like playing basketball down the street at LA Fitness. When Hector came in for his lesson he was wearing a knit beanie and Terryl pulled it off his head and put it on a table by the music system. As usual Hector like to trash talk with Enio who was just finishing a lesson. While Terryl was beating on Hector, he did not notice that Enio was next to his beanie. Enio had placed a pea size glob of glitter gel inside the cap and gone into the office. As soon as Hector finished his lesson, he grabbed his beanie, put it on his sweat head and ran out the door to play some ball before classes that night.

Twenty minutes later Hector stormed into the studio wanting to know which of the other team members had done him wrong. He accused the other boys one by one which only made him madder as they began to laugh at the glitter now smeared through his short hair. Enio innocently observed the procedure doing his best not to laugh. Finally, Hector running out of suspects to the crime, turned to Enio. Slowly Hector realized that he had been punked. Not knowing what to do he recounted that while playing ball, he had looked at the guy guarding him and noticed the guy had glitter on his arm. Hector asked the guy “Hey what’s up with the Glitter?” The other guy looked at Hector and responded “It’s coming from you Glitter Boy!” About 5 minutes later one of the other boys came running into the office yelling “Enio, you better go see your car, Hector is bending you antenna and windshield wipers!” Figuring he definitely had earned the payback, Enio was indifferent to the news, Terryl on the other hand rand towards the parking lot only to be rescued by the same boy, who stopped her a foot short of the back door. Hector had climbed up on the back door overhang and was waiting for Enio with a 30 gallon trash can full of water and almost doused Terryl instead- which would have meant being turned into a toad by Terryl’s magical powers had it happened. For weeks after Hector was referred to as Glitter Boy both at the gym and in the studio.

One summer night, class as usual, the both front and back doors open for any breeze, we had finished the warm-up and were just getting everyone into our normal teaching circle. All of a sudden I looked up and out of the corner of my eye, someone, face covered, and wearing only tidy whities, (although they were grayish) was bolting in past Nini at the front desk. Onto the floor, between a few students, coming right at Terryl and I. Given that we were about 4 feet apart, he ran right between us and continued straight out the front door and onto Main Street. 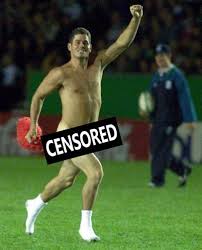