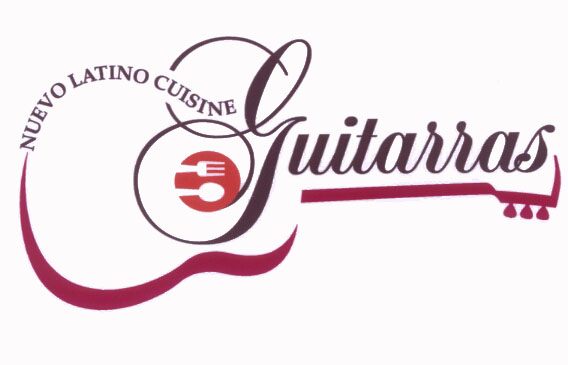 Even though we were not officially in the City of Pasadena, The Pasadena Weekly included locations that were frequented by Pasadena residents. Starting in 1998 with the sudden popularity of Swing We were named the Best Place to Swing Dance beating the Hollywood Derby and PBDA. Though it took a few years, once we were better known we began to win more and more categories. We were beating some of their bigger advertisers so they changed the rules and we no longer could be nominated even though we still were winning with write in votes. Some of the categories that we won for several consecutive years: Best Place to Dance, Best Live Music,Best Place to Hear Salsa, Best Spanish Tapas Food, and Best DJ. In 2008 Ciudad magazine awarded us Best of Latino LA. Fox TV 11 in their Best of LA had us as the Most Popular (partner) Dance Studio. 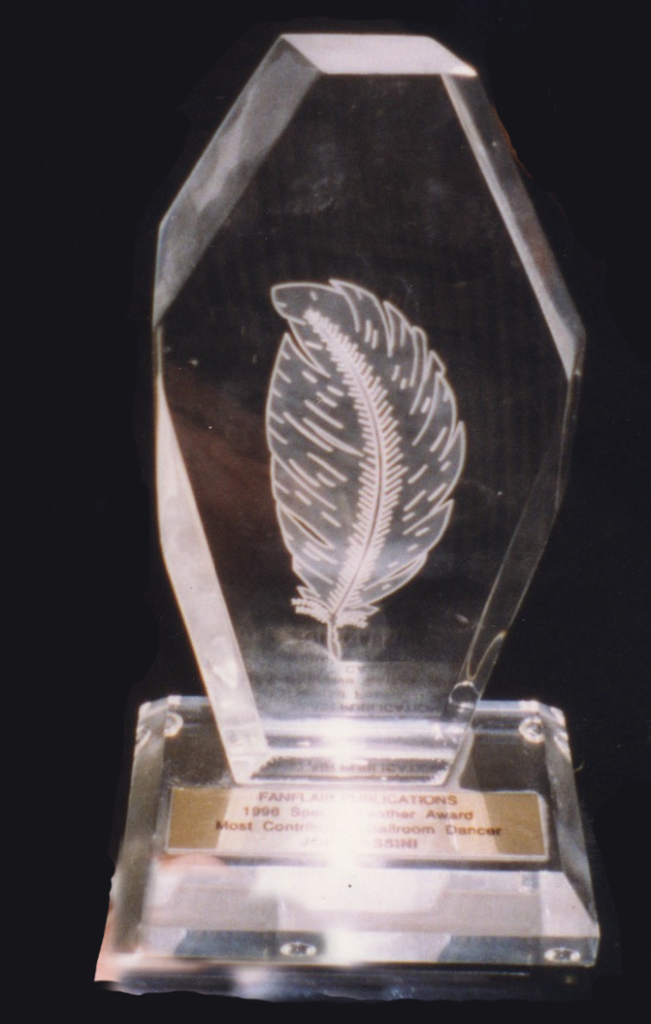 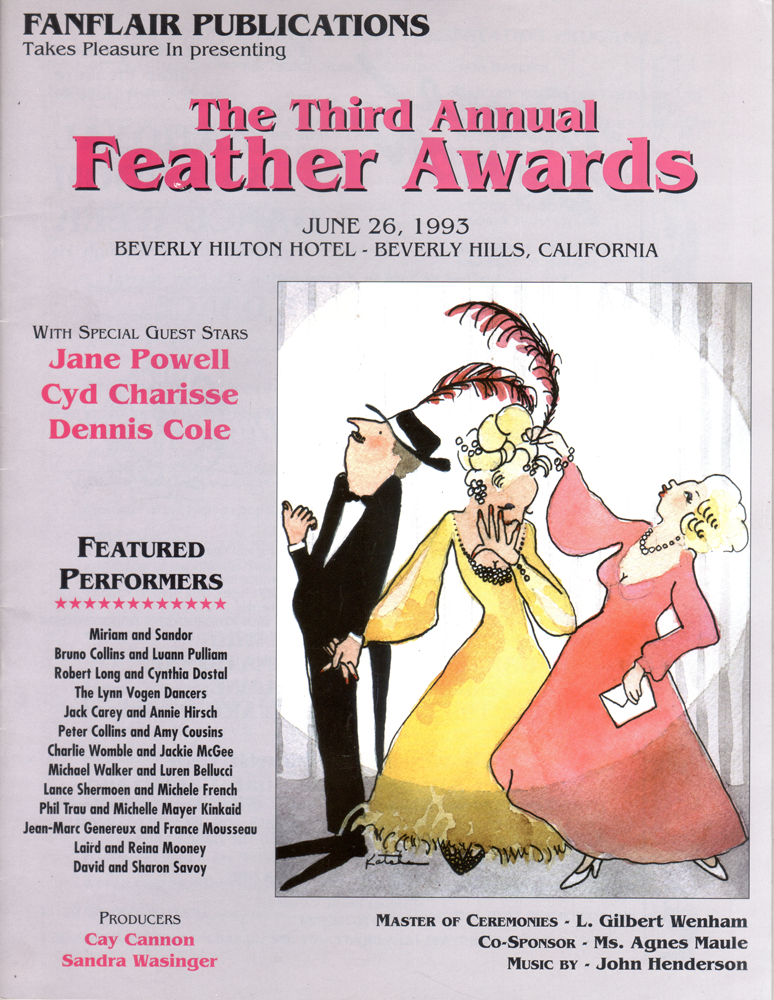 The Movies have the Oscar, Broadway Has the Tony, Music has the Grammy. Unfortunately there was no award for Ballroom Dancing until Cay Cannon, publisher of Dance Action and Jitterbug Magazines came along. Using a format much like the People’s Choice Awards, Cay invited a broad panel of Dance Professionals to nominate dancers from around the world in several categories. Robert, His partner Melanie Roberts (Best Swing Classic Couple) , our students Dale Emerman & Judy Kjos (Best Amateur Rhythm Couple- 3 consecutive wins!), Lance Shermoen and LDLA student Michelle French (Best Swing Showcase Couple)and Enio (Best Teacher) were nominated the 2nd year of the awards.. The Event held annually at the Beverly Hilton Hotel had celebrity presenters such as Hollywood legends Cyd Charise, Donald O’Connor, Ben Vereen, Jane Powell and many other stars. The black tie affair became a must see event until Cay Cannon’s death. Over the next few years Enio was nominated in both the Most Exciting Ballroom Mambo and the Best Street Solo Mambo categories and won the next two years- beating out Eddie Torres in the Best Single category. Robert  also won again, LDLA teachers Eddie Vedolla & Blair Johnson, as well as our mentors Joe Cassini, Ron Montez and Bob Medeiros. In 1992 he joined Best Mambo Dancer winner Bob Medeiros in a number that they choreographed between the LAX airport and the Hotel. In 1993 Enio was also a presenter at the awards and in 1993 and 1994, he and Terryl Jones were asked to perform impromptu by the presenter Dennis Cole. 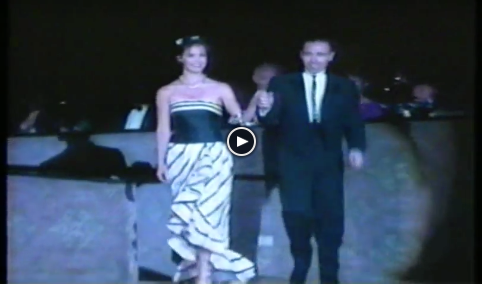 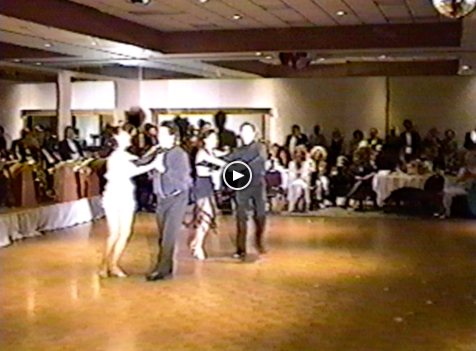 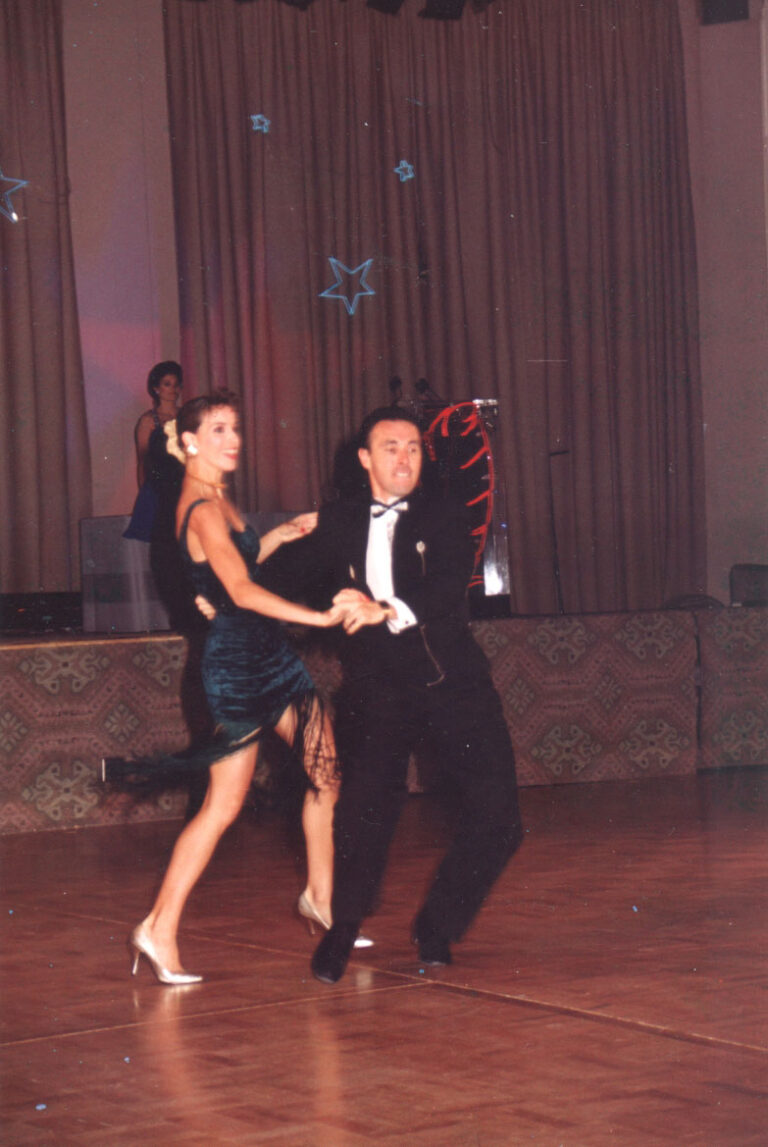 In 1993 Robert Cordoba was honored with the Rising Star Award at the California Swing Dance Hall of Fame. In 2000 he won the Shining Star Award. In 2009 Robert was inducted to The WORLD SWING DANCE COUNCIL HALL OF FAME honors Swing Dance Enthusiasts whose long-time contributions and accomplishments have contributed to the growth and prestige of Swing dancing. 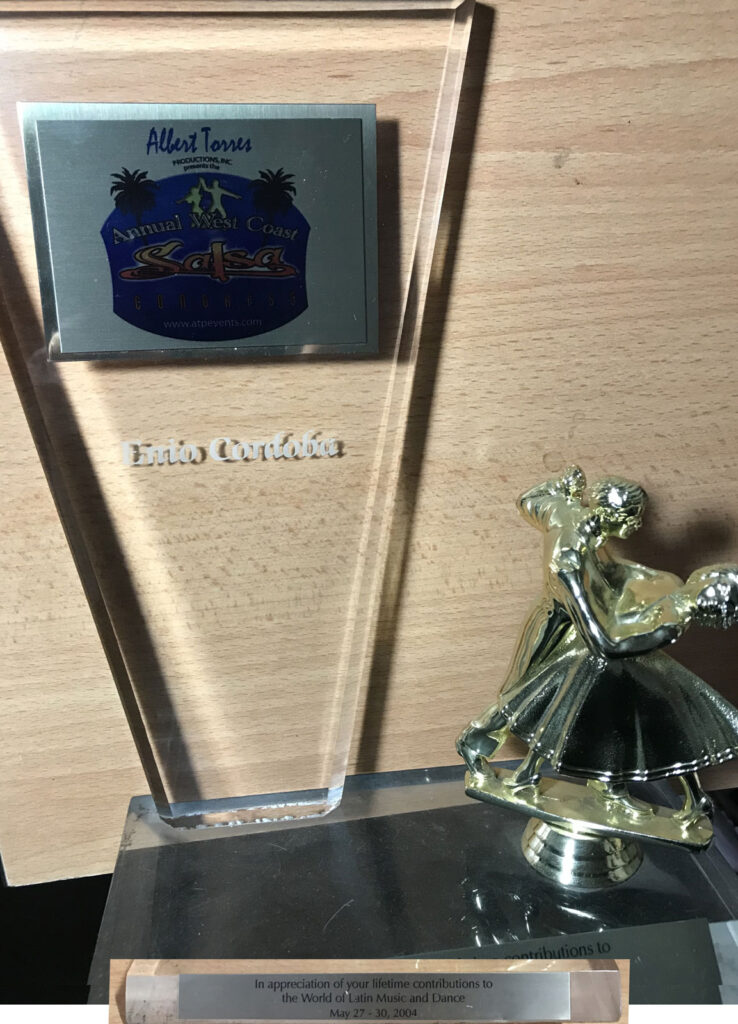 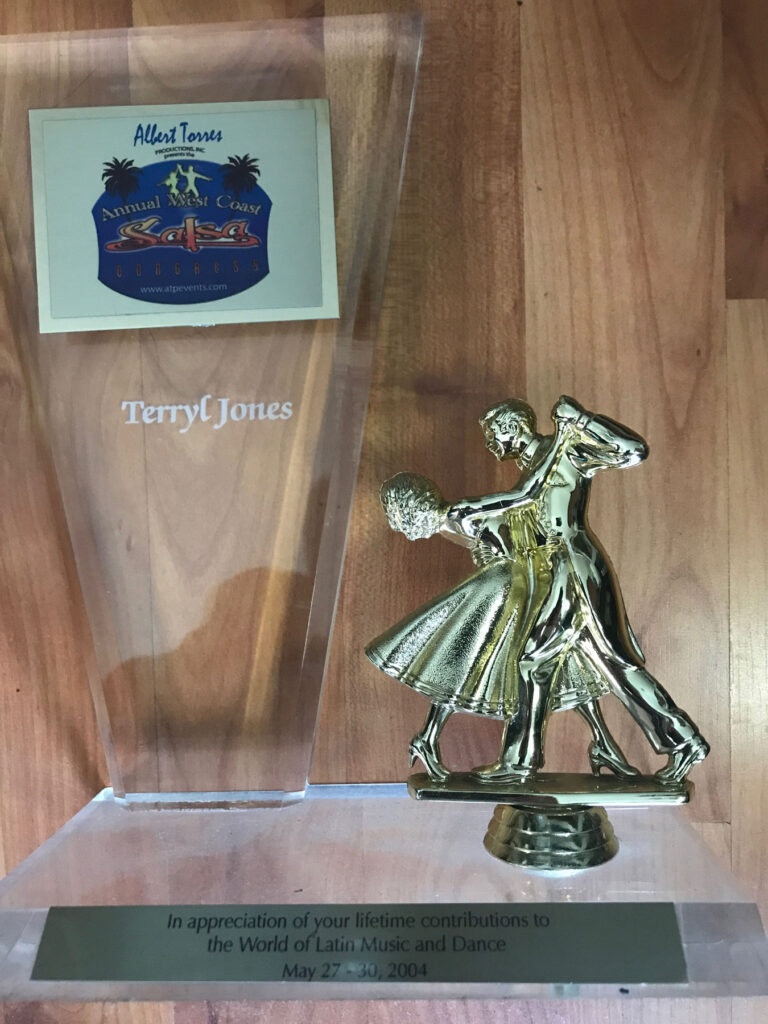 At the end of my competitive career in the Latin field, I won the 1987 United States Rising Star Latin Championship with Karen Lee and retired- or so I thought. Focusing on building a new studio quickly extinguished any thoughts of coming back even though I had many offers. Within two years I built a formation team of some of LA’s best Amateur Latin dancers and that team went to Miami and took home the gold medal at USBC.

Soon after we opened, Robert’s then-girlfriend Michelle Brakebill, asked me if she could do Latin. A former Ice Skater, Michelle learned very quickly and soon was competing in Latin and West Coast Swing. At the Galaxy Ball, she won the Top Silver Student Award, the  Pro-Am Latin, and we won the Pro-Am West Coast Swing, going head to head with legend Buddy Schwimmer and his student. Michelle soon turned professional, and with Lance Shermoen won the US Swing Open Showcase division, The World Swing Showcase Division and a Feather Award to boot!.

The following year another one of the girls on that team Janet Kvasnak teamed with Enio winning events From san Francisco to San Diego. By the end of summer, she won the Florida State Championship and one month later returning to Florida to win the US Ladies Pro-Am Championship at USBC and dance in the Grand Championship later that weekend.

Judy Kjos having won the US Pro-Am championship and dozens of events with former teacher Chris Morris switched to Enio and immediately won the Pro-Am Rhythm at the Texas Challenge, The Southwest Regionals, The Galaxy Ball and others

That year was quite wonderful for Let’s Dance as Janet won several other events including the Southwestern Regional and the Florida State Championships, as well as several Ballroom events as well. The studio competed at the Texas Challenge and won many events. Later that year at the California Star Ball, Enio took home the Top Teacher Award, the Top Studio, and his students Michelle Brakebill-French the top Silver Award, Judy Kjos the Pro-Am Rhythm and Janet Kvasnak the Pro-Am Latin.

The following year both Enio’s new pro-am Sandy Chase, and Robert Cordoba with his pro am Debby Dandurand, were finalists in the Ladies A at USBC.

One day a student recently arrived from Mexico and asked to take lessons. though she travelled back and forth, she always came back to LDLA. She recently won the World Salsa Pro-Am! Congratulations to Tania Aragon (Ricci) and now competes all over the world.

One day a girl selling magazine advertising came in and though she was a Salsa dancer, I introduced her to competitive ballroom dancing by showing her a video tape of a world competition. 2 hours later, Michelle Hafle had joined the studio and began taking lessons. For the next two years Michelle anchored our youth formation team and tried out several partners. Though she quickly outpaced each one, she never stopped learning. Just prior to the Granada opening Michelle became the studio’s marketing manager and Enio’s assistant. Finally finding a partner with the same commitment level, she moved to Texas and soon turned professional with Sergey Korshunov from Russia. Over a seven year competitive career they (like Enio) made the 24 at the British Open in the Rising Star division. She currently owns Studio 22 in Dallas where she trained Dallas Cowboy Hall of Famer Emmit Smith and Mark Cuban for Dancing with the Stars. They also performed a number with Cheryl Burke.

One night while out dining at Pasadena’s best Italian restaurant Mi Piace, I recognized the General manager Judith Castelan as a regular at my Granada. A very good Tango and Salsa dancer, I asked her ‘when she was going to start dancing for real?’ “This week.” she answered. Sure enough she started taking Ballroom classes at the WMB with us and she was a natural! Continuing on with private lessons, she decided to compete. Within a few months she was taking firsts in everything. She competed in Hawaii and two judges marveled at how much they enjoyed watching her. In 2015 she added Latin to her repertoire and competed in 10-dance. As I moved to Texas a the beginning of 2017, I recommended that she find the best young pro she could find.  Seven months later at the Embassy Ball she won the Ladies A Pro-Am World Championship in the Bronze Level with Stefano DiBrino. Since then she has added an amateur partner and is competing in Amateur Latin division as well.